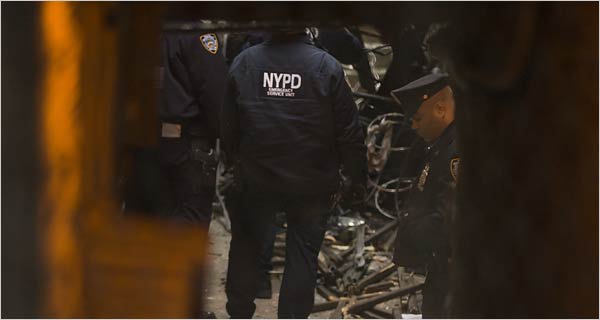 when a window-washing platform gave way on Friday and two brothers preparing to clean the black-glass skin of an apartment building on the Upper East Side fell 47 floors. Why did one die and the other survive, though he is grievously injured?
Five days later, the answer can still be only guessed at. Officials and window-washing colleagues of the two brothers speculated that they tried to ride their platform to the ground, as one window washer said he had been trained to do in such an accident.
If so, they were relying on basic physics — the platform would have generated some small amount of wind resistance, slowing the fall — and luck.
Fortune, if there is any to be found, was with the brother who survived, Alcides Moreno, 37. He was conscious and sitting up soon after firefighters arrived.
“He was on top of what was left of the platform that they were working on,” said one official who was at the scene.
The brother who was killed, Edgar Moreno, 30, may have been thrown off the platform as it hurtled toward the ground,was killed, cut in half by a wooden fence in an alley below. The official, who did not want to be identified because he was not authorized to speak about the investigation, said part of his body was under the platform.
The brothers were employed by City Wide Window Cleaning and were working at the Solow Tower, at 265 East 66th Street, at Second Avenue, when the scaffold gave way. Vincente Bustamante, 35, a good friend of both Moreno brothers and himself a window washer for 12 years, said he believed that Alcides Moreno survived because he followed the training window washers receive when they learn their job.
Window washers are taught that if a scaffold gives way, they should lie down flat on the platform, on their stomach because, Mr. Bustamante said, it gives them the best chance of survival should the scaffold catch on something on the way down. Maybe that is what Alcides Moreno did, he said.
“If you go over, that’s it,” he said. “You’re dead.”
He believed that that was what happened to Edgar Moreno — that he was either thrown from the platform, or jumped from it out of fear. “That’s your first instinct, because you’re scared — to jump,” Mr. Bustamante said.
It was not clear how much training the Morenos had received. The city requires people who work on a suspended scaffold to have a certificate showing they have completed a safety course. The city also requires each contractor to have a licensed master or special rigger, who can designate a foreman to oversee a job.
Local 32BJ of the Service Employees International Union, which represents unionized window washers in Manhattan, provides a weekly course over 18 months. Matthew Nerzig, a spokesman for the union, said the course is supposed to supplement 3,000 hours of apprentice work. He said there are no specific state requirements for window washers, but tradesmen are supposed to have 2,000 hours as apprentices and 180 hours of classroom training.

The scaffolding that broke last week, causing two window washers to plunge 47 stories on the upper East Side, had been cited for 10 violations in June, including four that were repeat violations, state records show.

Edgar Moreno, 30, of Linden, N.J., plummeted to his death on Friday after the scaffolding at the Solow Residences on E. 66th St. snapped.

His brother Alcides, 37, also of Linden, survived the fall but is clinging to life in critical condition at New York-Presbyterian Hospital Weill Cornell.

Inspection records from the New York State Labor Department show that the scaffolding had been inspected twice in the past two years - and 10 violations were issued, but they were not severe enough to warrant a stop-work order.

The violations included orders to repair a safety railing and the main roof, provide padding for workers and adjust an overload detection device.

Whether any of these violations caused last week's accident are "being investigated," the state Labor Department said.

The brothers were working for City Wide Window Cleaning, based in Jamaica, Queens, when the accident happened. They reportedly had complained about safety issues at the building, but were told that the scaffolding was safe. Moreno's family continued to hold vigil by Alcides' hospital bed, while doctors marveled that he survived a 550-foot fall.

The cause had not been determined, the authorities said, but it appeared that human error and perhaps a mechanical failure lay behind the accident, which occurred at 10:15 a.m. at the Solow Tower, a sleek, black-glass luxury building at 265 East 66th Street, just west of Second Avenue.

Investigators said that the two workers were not tethered to safety harnesses, as required, and that new motorized cables on the ends of the 16-foot aluminum scaffold were not properly anchored to a beamlike track that circles the roof. The men may have fallen as they stepped onto the scaffold, or they may have been dragged over the roof’s parapet by whipsawing cables as the scaffold plunged, officials said.

The authorities said the men, Edgar Moreno, 30, and Alcides Moreno, 37, who shared a home in Linden, N.J., and had washed windows for several years at the tower, were just preparing for the day’s work when they went over the edge and plummeted 500 feet. The scaffold struck the building’s facade once, shattering a window, before crashing in the alley.

Investigators say the scaffolding, called a swing scaffold, is a built-in feature of the tower, anchored by cables to a circular rooftop track, which allows workers to move the platform so window washers can reach windows around the whole facade.

The scaffold cables are motorized, enabling window washers to move up and down at the press of a button. At the rooftop, investigators say, the cables strung from both ends of the scaffold are threaded through steel arms that reach out over the parapet, like ship’s davits, and hold the scaffold in place within arm’s reach of the windows that sheathe the building.

Window Washer Fights for Life After 11-Story Fall A 58-year-old window washer who fell 11 stories from a building onto a moving car is "fighting for his life" and opens his eyes when relatives speak to him, his family said Tuesday. The man's name and hometown have not been released. "We are amazed that he fell from such a high distance and still survived. Landing on the car really helped, and we are so thankful for that," the man's family said in a statement released by San Francisco General Hospital. They family asked not to be identified. Police said the man was moving equipment on the roof of a bank building in San Francisco's financial district and not on a window-washing platform when he fell at 10 a.m. Friday crashing against the roof and back window of a sedan. "He is a stubborn, strong man, and he is fighting for his life. He has had several surgeries and is still in critical condition, but doing a little better," the stat